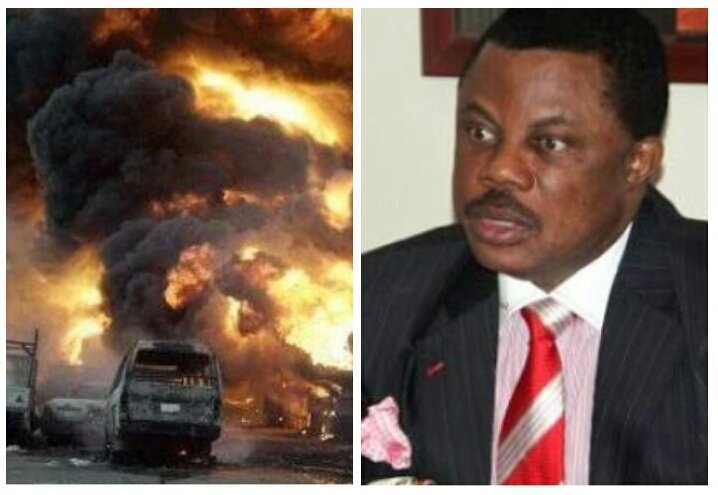 The Governor of Anambra State, Willie Obiano, on Thursday visited the scene of the Wednesday fire disaster in Onitsha.

The governor promised to compensate the victims of fire disaster that covered a distant of over 2 kilometres in no distant time.

On Wednesday a fuel tanker crashed into a drainage around the MCC near Upper Iweka axis of the Enugu-Onitsha express way in Onitsha causing a raging fire that destroyed lives and properties worth millions of naira including a pregnant woman and her 3 year old child.

24cliq gathered that the governor who was at the scene with members of his executive expressed sadness over the incident.

In his reaction towards the inability of Fire Service to respond to the fire that started from Upper Iweka area down to Ochanja market, the State Fire Service chief, Mr Martin Agbili said “our Firemen were refused access to the Fire scene.

“The efforts made by our sister State, Delta and other individuals like GUO Motors and their Firemen, were not successful as a result of the angry traders, who denied them access to the scene,” he said.

Governor Obiano who paid a visit to the fire service, said that his administration would work towards equipping the organization.

DAILY POST reports that the governor has also summoned the relevant agencies to an emergency meeting to explain their efforts during the incident including the state fire service chief.