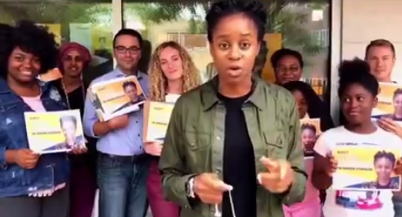 Nigerian-born Uzoma Asagwara of the Igbo descent has been elected as a lawmaker into the Manitoba Legislative Assembly in Canada in the 2019 Manitoba general election.

CTV reports that Asagwara was announced as the winner of Manitoba’s Union Station riding on Tuesday, making her the first Black, queer woman in the Manitoba Legislative Assembly.

The daughter of Dr K. C. Prince Asagwara, Uzoma Chioma Asagwara, alongside Jamie Moses and Audrey Gordon are the first three Black Canadian MLAs elected in Manitoba. Making it the first in the province’s 150-year record.

Reacting to her victory, Asagwara from the Eastern part of Nigeria said,

“This is a historic moment for our team and our communities,” Asagwara said to CTV News Winnipeg Tuesday evening.

She added that being one of the first black MLAs elected in Manitoba was “wonderful…incredible,” and a “sign that folks are really making sure that our elected officials reflect the communities they serve.”

WHO IS UZOMA CHIOMA ASAGWARA
Before her election, Asagwara worked as a psychiatric nurse.

She specialized in adult and youth mental health and addictions.

She is a well-known community activist, educator, entrepreneur and mental health advocate.

She is presently serving as a member of the Women’s Health Clinic board of directors.

She was a University of Winnipeg basketball star and was in the Canadian national women’s basketball team. She acts as a mentor for youth athletes in downtown Winnipeg

The founder of Queer People of Colour Winnipeg (2014) – a Winnipeg-based initiative that creates safer spaces for and increases the visibility and representation of queer and transgender people of colour, while kicking off her campaign tweeted on her official handle,

“The election has officially been called and Sept 10th is only a few weeks away!

I’m running to make sure Union Station is represented by a progressive and compassionate MLA with deep roots in our community.”