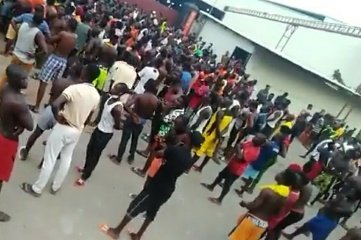 A Chinese company reportedly locked its workers inside the company’s premises during the compulsory 14 days lockdown put in place by President Buhari to check the spread of the deadly Coronavirus following the outbreak in Nigeria.

The action sparked up a protest by the workers who complained of being held in the company’s premises during the lockdown without proper care.

“We were held inside the company for 14 days of the Lockdown without proper feeding …” as tweeted by someone who claimed to be a staff of the company.

The angry Nigerian workers eventually destroyed items in the Chinese factory located at the Igbesa area of Ogun State.

According to Saharareporters, the Ogun State Police command spokesperson, Abimbola Oyeyemi, in a reaction said it was only a dispute between the company and the workers stating that noone is attacking anyone.

“Nobody is attacking anyone. What happened was a dispute between the workers and the management of that company.

“It is not as if members of the public are attacking the company.”