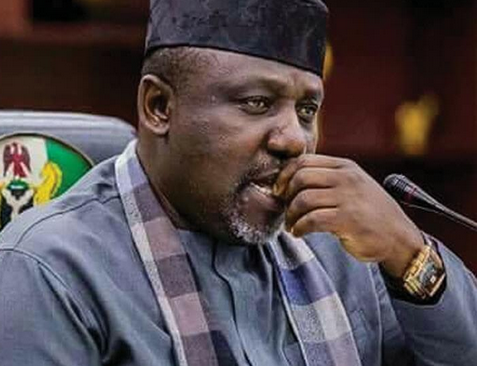 The former Governor of Imo State, Senator Rochas Okorocha, has been cautioned against actions and statements capable of causing problems in the state.

According to The Nation, the Chairman, Imo State House of Assembly Committee on Public Safety, Intelligence and Securities, Frank Ugboma, said this while speaking to reporters.

Reacting to the alleged beating of Mr Jasper Ndubuaku, Chairman, Imo Committee on Recovery of Government Property, by thugs while on official assignment in Okorocha’s residence in Owerri, Ugboma, the physical attack on Ndubuaku was wrong because he was carrying out official assignment for the state.

“In 2011 when Okorocha took over from Chief Ikedi Ohakim as Imo governor, he made Dr Placid Ekwueme, his recovery committee chairman and no one attacked him even when he attacked and took away things from people in the road. Ekwueme went to peoples’ homes to recover alleged stolen property and nobody stopped him” Ugoma said

He wondered why the ex Governor is bitter and angry describing the action as a slight, an insult and disservice to his office.

“Why is Okorocha bitter and angry now? Okorocha’s reaction is an affront on a sitting governor and his statement an insult on all of us. It is also a disservice to his office as a lawmaker of the Federal Republic of Nigeria and as a former governor of the state.”

“Any action or statement that may incite people must be taken and treated seriously as treason of sorts considering the state of security in Nigeria.”