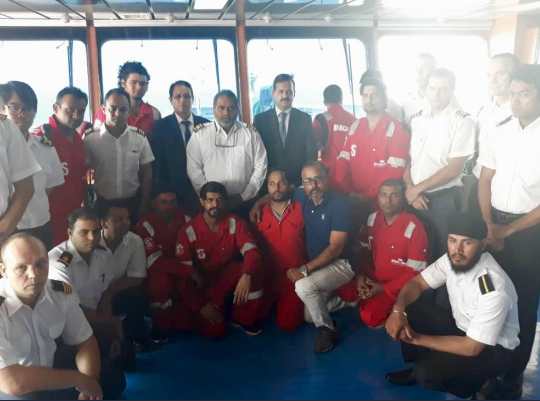 India’s foreign ministry has confirmed 9 out of the 12 Indian crew members have been freed by Iran.

They were crew members from a Panama-flagged tanker seized almost two weeks ago in the Strait of Hormuz.

According to Al Jazeera, Raveesh Kumar, the official spokesperson of the India’s Ministry of External Affairs said on Friday that those crew members released “will be on their way to India soon”.

“Our mission in Iran has requested the concerned Iranian authorities for the release of remaining crew members,” he was quoted as saying by AFP news agency.

The vessel, the MT Riah, was accused of smuggling contraband fuel and was consequently detained in mid July.

MT Riah had crossed into Iranian waters on July 14 and stopped transmitting signals shortly after as reported by The Tanker Trackers online oil shipment website.

In a related development, a British-flagged Stena Impero tanker was seized by Iranian forces last week. The tanker and its 23 crew (18 Indians, there are three Russians, a Latvian and a Filipino) allegedly broke “international maritime rules” and was impounded at the southern port of Bandar Abbas.

India Minister of State for External Affairs, V Muraleedharan, stated in his official Twitter account that the 18 India crew members are fine and that they are working towards their early release.

“All 18 Indian crew members on board are safe and doing fine. Will continue to push for their early release,”