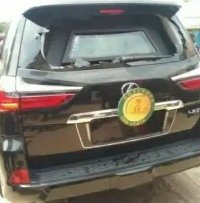 Governor Hope Uzodinma, of Imo State was on Sunday evening attacked by some youths in Imo State Sahara Reporters reports.

According to the report, the youths of Ohaji community in Imo State vented their anger on the governor who was to attend a function in the community, hurling insults and throwing all sorts weapons like bottles and sticks at his bulletproof SUV.

Upon arrival of the governor’s, the youths of Mmahu community in Ohaji started shouting “onye oshi vote” (meaning one who stole vote). They threw harmful objects at his vehicle which smashed the SUV’s windshield.

The governor was eventually evacuated from the area by his security operatives as the situation was getting very tensed.

Uzodinma came into office after the apex court, last Tuesday, dismissed Ihedioha’s application urging it to review its earlier judgment in favour Uzodinma.

BREAKING: FG orders the release of Dasuki and Sowore