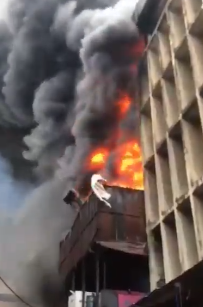 Fire on Tuesday gutted a complex on Martin Street on the Lagos Island area of Lagos State.

The fire which started in the morning became an uncontrollable blaze by midday, and started making ashes out of the colourful Nigerian fabrics, shoes and other things being sold in the complex.

Traders and people around were seen struggling to salvage what they could from the blazing fire, while some others tried in their little way to put off the fire.

Men of the Lagos State Command of Fire Service were deployed to the scene.

The cause of the inferno and casualties are yet to be known.