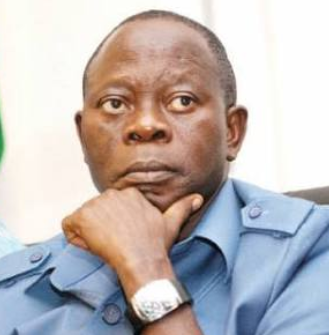 The Edo State chapter of the All Progressives Congress (APC) has suspended the National Chairman of the party, Adams Oshiomhole, over his alleged role in the crisis affecting the party in the state.

RIPPLES reports that the decision is outcome of a vote of no confidence supposedly passed on Oshiomhole on Tuesday by the Chairmen of the APC in the 18 Local Government Areas (LGAs) of the state.

The ruling party also sacked its secretary in the state, Lawrence Okah. A vote of no confidence was also reportedly passed on Okah and the leadership of Barr Anslem Ojezua.

While briefing newsmen after the meeting of the party’s State Executive Committee, the Deputy State Chairman of the APC, Kenneth Asekomhe, said, “After the meeting of the State Executive Committee, in pursuant of Article 17, Section 5 of APC constitution of 2014, as amended, we the undersigned members passed a vote of no confidence on the State Secretary of the party, Mr Lawrence Okah. He is hereby removed from office.

“The committee also passed a vote of confidence on the State Chairman of APC, Mr Anselm Ojezua.”

“The APC chairmen in the 18 LGAs of the state also reaffirmed their support for the second term bid of Governor Godwin Obaseki on account of his developmental strides.

“The chairmen passed a vote of no confidence on the National Chairman of the APC, Comrade Adams Oshiomhole.”

The APC Chairman in Esan Central LGA and Secretary, Edo State APC Chairmen Forum, Hon. Mike Anakaso, said the chairmen passed a vote of no confidence on Oshiomhole for his role in trying to disintegrate the party in Edo State.

He revealed that “Comrade Adams Oshiomhole is the one behind the crisis in Edo APC and a vote of no confidence was passed on him.

“We don’t want what happened in Zamfara or other parts of the country to happen in Edo State.”he added.

In a related development, RIPPLES also reported that in another statement jointly signed by the Chairman of the body and Etsako West Chairman, Ibrahim Akokia, as well as his Etsako Central and Owan West counterparts, Suleiman Bagudu and Lugard Alukpe respectively, the 18 LGA Chairmen of APC in Edo distanced themselves from Oshiomhole’s suspension.

They insisted that they were not aware of such a meeting where a vote of no confidence was passed on Oshiomhole who they said was “doing very well”.

The chairmen further accused the state Governor Obaseki, of harassment and intimidation, adding that his actions could pull down the APC in the state.

They, therefore, called on the National Working Committee (NWC) of the party to expel Governor Obaseki from the party over allegations of anti-party activities.