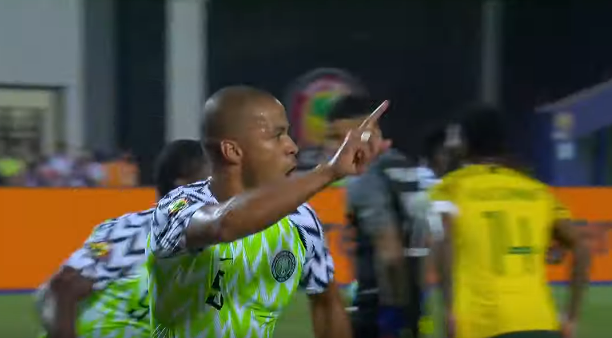 The Super Eagles of Nigeria humbled the Bafana Bafana of South Africa 2:1 on Wednesday, to head on to Semi Final in the ongoing African Cup of Nations (AFCON) 2019.

The Super Eagles were indeed the Super players during the encounter as the Bafana boys started suffering much pressure at the beginning of the encounter.

About 5 minutes into the game, a stunning chance was created for the Leicester City midfielder, Wilfred Ndidi, whose resounding shot would have been one of the great goals of the tournament but unfortunately it went wide.

About 20 minutes later, a brilliant combination between Musa, Iwobi and Chukwueze sent some hormones of shock racing round the veins of South Africans while shouts of acclamation were coming from Nigeria as the Villarreal player, Chukwueze dazzled the Bafana bafana goal keeper at exactly 26.41minutes to make Nigeria lead 1:0.

Five minutes to the end of first half, the 20 year old star, Chukwueze, came again, this time around from the right flank. But his incredible moves to mesmerize the defenders inside the box was blocked unlike the initial fruitless blocking from a defender that got Nigeria the first goal.

It was a happy moment for Nigerians during the break, but a time for the Super Eagles coach, Gerhot Rohr, to do more work on his boys so as to maintain the lead.

The spirit was maintained in the 2nd half as Oghenekaro Etebo’s free kick at the 50th minute almost put Nigeria in a clear lead but for the amazing goal keeping skill of the South African goal keeper who saved the net from smiling again in favour of the Super boys.

Chukwueze displayed another outstanding performance in the 57th minute with a brilliant strike from the right flank beating the defenders in the box but unfortunately there was nobody to finish into the empty goal post.

The Bafana boys tried to bounce back with a goal at about 71” from Bongani Zungu’s header. But behold the flag was up. Assistant referee saw an offside but was later declared a goal by the VAR. It became an equalizer. 1:1.

The South African boys’ hope of pushing the match to extra time was dashed by a last minute saviour’s goal by William Ekong from a corner kick at the 89th minute to make Nigeria lead 2:1 against the well rated Bafana boys.

The three times AFCON champions exhibited their readiness to grab the 2019 AFCON title as they qualify for Semi finals.