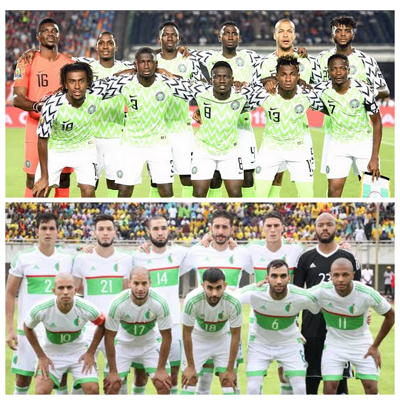 “we want to write our history…” Algeria Coach

Hours to the big match,

Both countries are being optimistic.

Both teams are in high spirit.

Both managers are creating impermeable tactics and strategies.

Will the Eagle fly over the Desert freely or will the harshness of the desert crash land the Eagle?

Sunday 14 June 20:00, will provide answer to this question as the Super Eagles of Nigeria take on the Desert Foxes of Algeria in the semi finals of the African Cup of Nations (AFCON) 2019.

Algeria maintains the record of the only unbeaten team in the tournament so far while Nigeria lost one match.

How does the Nigerian team feel about this record and the upcoming match?

Super Eagles recognize the fact that Algeria is a strong side but assured Nigerians and fans that they are not scared of them and that the Eagles will fly over the Desert.

“Algeria is a good team, but we are not scared of them. We can’t be scared of any team at this stage of the competition,”

The 20 years old Villarreal star, Chukwueze, had an outstanding performance in the Super Eagles match against South Africa on Wednesday, which got him The Man of the Match award.

On the unbeaten record of the Algerian team, the sensational player stated:

“We saw their game against Ivory Coast. It was an interesting game between two top quality teams. For us, we are not afraid, they are beatable”

Super Eagles striker, Alex Iwobi, also noted that the Algerian team is a strong team but hopes that Super Eagles will defeat them.

“We are not worried about the way they’ve played and their unbeaten run. We just have to try and win it. Algeria is one of the great teams in Africa.

“We know it’s not going to be easy, they’ve got quality players but so do we. It’s going to be a great game to watch, let’s hope Nigeria can do it.

Meanwhile the Algeria Coach, Djamel Belmadi has admitted that it is going to be a tough one but his boys are ready to write history.

During a pre-match press briefing according to Dailypost, Belmadi said:

“This is our target, we want to write our history and the players want to write their history as well. It’s not far – two more steps, but two very difficult steps to this great achievement. We will try our best.

Recall that Algeria has beaten Nigeria twice in AFCON in the past. In 1990, they beat Nigeria 1:0 to lift the AFCON trophy in Algiers.